The struggle for laïcité in France 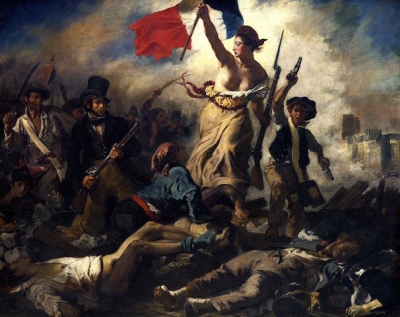 France is usually thought of as the embodiment of laïcité (secularism). However, the struggle to both reach a generally accepted understanding of it, and to implement it, is ongoing. The immediate past has highlighted tensions due to religious beliefs and practices in French society, whereas recent social and religious evolutions also have an impact on laïcité.

Laïcité is nowadays an important topic in French public debate: according to the catalogue of the Bibliothèque nationale de France, in 2014 no less than 11 books contained the word in their title, whereas newspaper Le Monde recently also dedicated a newsletter to it. Another illustration of this reality is the formation, by the government, of a monitoring group on secularity, the Observatoire de la Laïcité, which was created in 2007 by president Jacques Chirac and fully set up in 2013 by president François Hollande and prime minister Jean-Marc Ayrault. The aim of this monitoring group is to advise and assist the government in ensuring respect of the principle of laïcité. In July 2014, the Group issued a short note entitled La laïcité aujourd’hui (Secularism today), recalling the historical roots and meaning of secularism and developing ways of implementing it in contemporary society. This reflects the current struggle to reach a balance between promotion of secularism and respect of religious freedom.

French laïcité is the result of a historical process that started with the French Revolution and its affirmation of freedom of religion. It rests on the separation between the State and religious denominations, as expressed in the law of December 9, 1905: the law “guarantees the free exercise of religious worship” (Art. 1) and “the French Republic does not recognize, pay, or subsidize any [form of] worship” (Art. 2). This laïcité is asserted in Art. 1 of the French Constitution of October 4, 1958, which states that France is a « secular » Republic, ensuring equality of all citizens before the law without distinction of religion, and which « respects all beliefs ». From the onset, establishing laïcité came down to balancing the need to keep religious institutions at a certain distance with the necessity for the State to take religion into account by, a minima, guaranteeing freedom of religion. An illustration of this tension: even though the law provides that the French State does not subsidise religions, hospital, prison and school chaplaincies are publicly financed.

The difficulty of this search for equilibrium is not a new question. It firstly lies in the fact that there is no commonly accepted definition of French laïcité – a recent book even lists seven different understandings of it (Jean Bauberot, Les sept laïcités françaises. Le modèle français de laïcité n'existe pas, Paris, 2015). It also highlights that the evolution of society parallels changes in the meaning of laïcité. Therefore, since the religious situation in France has evolved significantly during the latest decades, laïcité needs once again to adapt and evolve, in answer to the present-day situation.

The changes in the French religious landscape result from a combination of different trends, the first of which is a change in religious composition. As French law forbids to include questions about religious affiliation in official demographic studies, no statistic data concerning religion is available. As a consequence, information on religious affiliation can only be obtained through surveys carried out by private specialised institutes. Although numbers vary, some general trends can be identified. Firstly, all surveys show that believers no longer represent the overwhelming part of the population, and that the proportion of atheists and unaffiliated people has increased (39 % in 2014 according to a survey of Sociovision/Fait religieux). Catholicism, although still constituting the dominant group, experiences a significant drop in belonging – see for instance the IFOP survey « Catholics in France in 2010 »: from 87 % of the population in 1972 to 64 % in 2010 – as well as in practice (statistics of the French Catholic Church).

At the same time, religious diversity is increasing due to the growing number of members of recently arrived denominations (mostly through migration), but also due to a change in mentalities, with minorities seeking greater visibility. This in turn affects the relation between religion and politics, as the influence of traditionally important religious groups is diminishing. At the same time, growing attention is being paid to minority groups (including religious ones). Whereas the voice of religious communities such as for example some smaller Protestant Churches is increasingly being heard, Islam is the most famous emerging religious group. There are a number of reasons for this, and they differ according to the issues at stake.

Be that as it may, one of the main reasons is most probably that, laïcité being rather recent in view of the country’s history, France’s civil organisation remains very much dependent on a Christian framework: many bank holidays are Catholic feasts, Sunday is the legal weekly day off, fish is still commonly found on Fridays in many set menus, many hospitals are former religious institutions and thus contain a chapel, and so on. As such religious elements and practices are integrated in the general organisational structure of French society, making them less noticeable. Hence it should come as no surprise that discussion concerning the place of religion in society mainly concerns non-Christian religions.

The most famous issue is probably the headscarf controversy, which emerged into the public sphere during the 80’s, with the increased use of headscarves worn by young Muslim girls at school. After years of intense public debate, in 2004 a law was adopted which banned "the wearing of symbols and apparel by which a student conspicuously expresses religious affiliation in public schools". A few years later, in 2010, another law banned concealment of the face in public; it followed the publication of the report of the fact-finding mission on the practice of wearing the full veil in France. Although the text does not explicitly mention it, it was obviously directed against such a practice. Nevertheless, both a 2013 recommendation of the State Council and a judgement of the administrative court of Nice in 2015 point to a change in policy, as they stated that the ban on wearing headscarves in school does not apply to adults accompanying children during a class outing. In addition, a 2015 statement of the Conference of the presidents of French universities claimed that there is no legal basis to ban the headscarf in universities.

The headscarf has also been at the centre of debate on the role of religious symbols on the workfloor. In this context the most famous episode is the dismissal of a child-minder wearing a headscarf in the Baby-Loup child day-care centre. The case came to an end when the dismissal was finally declared legal in July 2014. This judgment does not affect existing labour law, which requires religious neutrality; it does, however, signify that it applies not only to public institutions, but also to individuals working in private companies and institutions.

The Baby-Loup case is not an isolated episode: religious matters increasingly affect the workplace, whereby difficulties arise concerning, among other things, religious practices, bank holidays for feasts, prayer time, and religiously compatible food. Other recurrent issues are proselytism, religious discrimination, or also religiously motivated refusal to accomplish certain tasks or interact with people of other religions. Furthermore, matters linked both to culture and religion such as gender issues can also cause tension. Such problems remain relatively marginal, as shown by a Groupe Randstadt study which reveals that 92 % of interviewees have no problem with their colleagues’ religious practice. However, 78 % also consider that the workplace must not take into account religiously-grounded demands, whereas acceptance of the visibility of religion in the workplace seems to be diminishing.

A particularly hot topic is the question of religiously motivated dietary requirements, which has recently become an important problem since in a certain number of public school canteens the mayor (who is the legal manager) has decided to stop offering alternatives to pork (e.g. the judgement of the administrative court of Dijon). In March 2013, a report of the Defender of Rights on equal access of children to school canteens had indeed stated that it is not obligatory to adapt canteen menus to the requirements of religious beliefs. Whereas this report did mention an increase in demand of such a possibility, it did not offer any solutions. Shortly thereafter, the 2013 annual official report on prisons dedicated a chapter to the matter of religious observance in prisons (Contrôleur général des lieux de privation de liberté, Status report 2013, ch. 8, “Retour sur la question de la laïcité dans les lieux privatifs de liberté”), stating that the French system of laïcité does not forbid to provide prison meals that are conform to religious prescriptions (halal or kosher for instance). The Lyon administrative court has nonetheless annulled a 2013 judgement ordering the prison of Saint-Quentin-Fallavier to provide halal meals to Muslim detainees, whereby referring to the necessity of balancing detainees’ religious rights with the necessities of public service.

Concerning religious slaughter, a slow and steady change in regulation can be observed. Currently, only three mosques can deliver an authorisation to slaughter animals following the halal method (Evry, Paris, Lyon). On the occasion of the 2014 Eid Al-Adha, the Ministry of Agriculture allowed the opening of temporary slaughter houses, and published a leaflet providing information and regulations. Furthermore, according to governmental information, prison and hospital chaplaincy is now open to Muslims, Buddhists and Jehovah's witnesses. A growing number of private confessional schools, including four Muslim schools, have also passed a contract with the State (according to the Debré Law of 1959), allowing them to obtain State funding.

Based on this global picture, one can neither conclude that religion is never taken into account in French laïcité, nor that religious demands always meet with approval. Religious conflicts are not the illustration of the French laïcité system’s failure, but rather the manifestation of its stamina and constant adaptation to the evolution of French society. All these tensions must be understood in the larger context of an evolving society, including transformations in France’s changing self-perception, and in French society at large. The tragic events of January 2015 – the killing of 12 people by two radical islamists in the premises of the French satirical weekly magazine Charlie Hebdo on January 7th, followed by another killing of 4 two days later in a kosher supermarket – have of course cast an important shadow over the question of religion in secular France.

However, although it has caused numerous debates on the question of French religious pluralism and laïcité, and although it has prompted a certain number of anti-religious and anti-Islamic declarations – notably by extreme-right political leader Marine Le Pen –, these dreadful events may also have had a positive impact. Firstly they have motivated French officials to state that protecting freedom of conscience and religion also applies to Muslims – in February 2015, Interior Minister Bernard Cazeneuve advocated an "inclusive laïcité". Seemingly they have also catalysed the establishment of an instance of dialogue of the government with French Islam. Last but not least, they have also led to the biggest protest march that France has ever seen, gathering 4 million people who for the most part wanted to express their attachment to tolerance.

In the future, laïcité will probably increasingly require better recognition of particular identities, with the chief aim of provoking the support of all. Nevertheless, 75 % of the French consider that it is an essential (23 %) or very important (52 %) element of France’s identity (CSA /CNAL poll 2005). All in all, and even if it is difficult to implement and adapt to a religiously changing society, laïcité remains a very significant feature of French society.