Expansion of Pentecostalism in Cameroon Amidst Tension 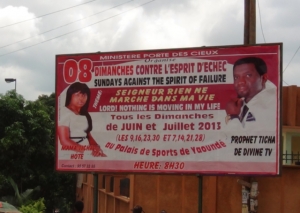 Though religion is quite widespread in Cameroon with Christianity being the most represented, very little research has been carried out on the subject. There has been a remarkable proliferation in religious movements following the advent of Independence. In 1960, most Churches were of foreign origin, established by missionaries. Current statistics show that approximately 65% ​​of the population identify themselves as Christians. Catholics and Protestants considered “traditional” or “classic” trends numerically outnumber all the others. Despite the upsurge of “new Churches”, over the years, the numerical superiority of the established Churches appears to be growing. However, many “new” Churches, belonging mostly to the Pentecostal movement manage to overtake the “senior” traditional Churches thanks to their entrepreneurial and innovative spirit. In doing this, they alert government authorities. Entrepreneurial and innovative spirit may not be the problem, but the methods and their social impact. The purpose of this review is to discuss one aspect of this multiplication despite the tangible tension with administrative authorities.