Religion and secularism in Poland 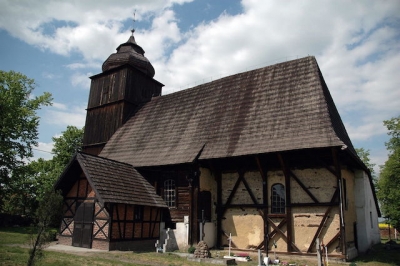 In Poland, religious freedom is guaranteed by the 1997 Constitution and by international instruments incorporated into Polish law. The country is also party to most European and universal human rights documents. In 2003, the number of Catholics was estimated at 34,443,998 (90.1 % of the entire population), the number of Orthodox Christians at 510,712 (1.34 %) and the number of Protestants at 162,102 (0.42 %). Surveys of the Centre of Public Opinion Research (CBOS) and the Catholic Church Institute of Statistics have shown that 90 % of the Polish population consider themselves a religious person, whereas the latest CBOS survey (2015) reveals that 50 % of the population participates in mass at least once a week (58 % in 2005). The same survey indicates that the proportion of people who do not attend Church services has increased from 9 % in 2005 to 13 % in 2015. Daily prayer is also in steep decline: from 66 % in 2005 to 43 % in 2015.

The Polish Constitution does not explicitly refer to the principle of Church-State separation. The relationship between the State, Churches and other religious denominations is defined by five principles: impartiality, equality of rights, autonomy and independence, cooperation, and bilateralism. The principle of impartiality is the essence of Polish secularism. It presupposes an objective attitude, free from bias and characterized by an equal approach towards all beliefs which respect the Polish legal system’s fundamental values. It ensures the freedom of public expression of personal convictions, whereas people who perform public functions also have the right to participate in religious celebrations. The principle of equality of rights of Churches and other religious denominations allows for all denominations to freely exercise their religious functions, i.e. defining religious doctrine, conducting religious services, adopting laws that govern internal issues, educating and employing religious personnel.

The Act of May 17, 1989 on freedom of conscience and religion guarantees equal rights to believers and non-believers. It also established a general framework for all Churches and religious communities in Poland, guaranteeing participation in the enforcement of laws regulating their legal status. All legally registered religious organizations enjoy the same rights, whereas apart from the Jehovah’s Witnesses, who operate on the basis of the 1989 law, the activities of fifteen of them are governed by special laws. The registration procedure for religious organizations has been designed in order to foster religious pluralism, as the implication of only 100 adult citizens is required. Their current number is 158.

One of the most visible manifestations of Catholicism’s prominent role in Polish history is the presence of the cross in the public sphere. Court decisions issued in cases in which non-believers demanded that crosses be removed from public offices have attracted a lot of public attention. Both the October 28, 1998 judgment of the Court of Appeal in Łódź and the November 25, 2010 judgment of the Court of Appeal in Szczecin ruled that the plaintiff’s freedom of conscience or religion had not been infringed upon. The Courts argued that there was no violation of the constitutional principle of impartiality of public authorities in matters of personal conviction, whether religious or philosophical, as “in Polish society the cross is treated not only as a symbol of the Catholic religion, but it also embodies universal values which derive from the Christian tradition and are also part of Polish material and spiritual culture”.

The same line of reasoning inspired the January 14, 2013 judgment of the Regional Court in Warsaw, following an action filed by a group of MP’s who demanded that a cross be removed from the Chamber of the Sejm (Low Chamber of the Polish Parliament). Most significantly, a December 3, 2009 Sejm resolution aimed at protecting freedom of conscience and at the promotion of values based on common European heritage. It emphasized, among other things, that “the cross is not only a religious symbol and a symbol of God’s love for the people, but in the public sphere it also reiterates readiness to sacrifice for one’s fellow man, whereby fostering respect for the dignity and rights of every human being”. The Polish Senate’s February 4, 2010 resolution contained similar wordings.

Another controversial topic is the offence of religious feelings, as exemplified by the case of Adam Darski (stage name: Nergal), who was accused of publicly insulting religion during a September 13, 2007 Behemoth concert. While on stage, he tore up a Bible while shouting “this is a Book of lies, fuck this shit, fuck this hypocrisy, eat this shit”. On August 18, 2011 the District Court in Gdynia found Darski not guilty, judging that the musician’s behaviour was “kind of an artistic performance”. Even if Darski argued that he had no intention to offend anyone’s feelings, the General Attorney opined that he might still be guilty even though not acting intentionally. Hereupon, the case was taken to the Supreme Court. The latter’s October 29, 2012 resolution did however not resolve the interpretative dilemma and, after having been taken to the Regional Court in Gdansk (February 11, 2014), the Darski case is now final.

A subsequent issue is religious education. In Poland, religious and ethics courses are optional, whereby the choice depends on parents or pupils, but also on pupil numbers. At present some 24 religious denominations organise religious education in public schools. Issues related to religious education have also occasionally been taken to court. The most significant episode in this context is the action launched by Mateusz Grzelak, who filed a case before the European Court of Human Rights (ECHR) following the absence, throughout the entire period of his schooling, of marks on religion/ethics in school reports. On June 15, 2010 the ECHR judged that this “amounted to a form of unwarranted stigmatisation”, in violation of Art. 14 of the Convention, in conjunction with Art. 9 (§ 101). The ECHR also observed that the provisions concerning religious and ethics courses in the Polish educational system were illusory and ineffective (§ 91). As a consequence, and as of September 1, 2014, the minimal number of pupils required to organize ethics courses has been reduced.

Animal rights have also been at the centre of Polish public debate, leading to a series of court procedures, notably regarding the practice of ritual slaughter. In its December 10, 2014 judgment, the Constitutional Tribunal stated that Art. 34 § 1 of the Act of August 21, 1997 on the protection of animals is inconsistent with Art. 53 § 1, 2 and 5 of the Constitution in connection with Art. 9 of the Convention for the Protection of Human Rights and Fundamental Freedoms, as it does not allow the subjecting of animals to slaughter in accordance with special methods prescribed by religious rites. The same also counts for Art. 35 § 1 and 4 of the Act, which considers subjecting animals to this kind of slaughter a criminal offence. The Tribunal judged that freedom of religion, and especially the right to manifest religion, encompasses the right of religious organizations to practice ritual slaughter.

The absolute prohibition of such practices is thus seen as an unfounded restriction of freedom of religion. Since this judgment was made public (December 12, 2014), the contested provisions of the Act on animal protection are no longer in force. At present, ritual slaughter is regulated by European Council Regulation No. 1099/2009 of September 24, 2009 on the protection of animals at the time of killing: Art. 4 § 4 of the Regulation states that stunning is not obligatory when animals subject to particular methods of slaughter prescribed by religious rites are concerned, provided that slaughter takes place in a slaughterhouse.

As in many other EU countries, Poland has also witnessed public debate on conscientious objection, notably regarding abortion. The most recent case (2014) is that of public hospital professor, Bogdan Chazan, who refused to perform an abortion and was consequently dismissed from his functions. Not surprisingly, the Bureau of the Polish Bishops’ Conference expressed support for Chazan, stating that “conscientious objection must be protected not only from legal penalties but also from any negative legal consequences, disciplinary, financial and professional”. The National Council of Medical Professions has asked the Constitutional Tribunal to examine the constitutionality of the provisions included in article 39 of the Act on Medical and Dental Professions of December 5, 1996. The Tribunal’s decision is pending.

A final and related controversial issue is in vitro fertilization (IVF). Under pressure from the European Commission, Poland’s coalition government, led by the centre-right Civic Platform, has for several years, and so far unsuccessfully, been trying to pass IVF legislation. Once again the Bureau of the Polish Bishops’ Conference clearly expressed its opinion in the debate, notably announcing that from a “moral point of view, in vitro fertilization cannot be accepted, as it turns man into a product of human activity, and is subjected to technical, not ethical rationality”.

Elaborating on such ideas, Archbishop Józef Michalik declared that “before our eyes the promotion of a new gender ideology is taking place. Some universities in Poland have introduced lectures on this new and vague ideology. These universities’ boards consist of the most aggressive Polish feminists, who for years now have been sneering at the Church and at traditional ethics, promoting abortion and fighting the traditional family model”. Taken to the District Court in Przemyśl, the action against the Archbishop brought in by feminist activist Małgorzata Marenin was dismissed, as the Court opined that no personal interests had been infringed upon.

Episodes such as the above clearly show that in spite of many provisions which formally guarantee, if not strict Church-State separation, in any case a mutual independence on both sides, Polish society and mores remain predominantly Catholic, whereby the Church continues to exert profound influence on social, political and private life. Indeed even though surveys suggest a slow decline in religious affiliation, Poland remains one of the countries in Europe where religion has retained not only considerable symbolic capital, but also fundamental social significance.