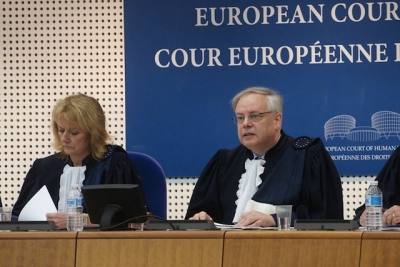 Two weeks after the adoption of the Guidelines, a third event has revealed the impact of European actors in freedom of religion or belief to a greater extent.  On 9 July 2013, again in Strasbourg, the Grand Chamber of the European Court of Human Rights decided in the case Sindicatul Păstorul cel Bun (‘Trade Union The Good Shepherd’) v. Romania that the refusal by Romanian courts not to register a trade union of priests and lay people belonging to the Orthodox Church of Romania did not infringe the European Convention, thereby reversing a previous ruling by the Third Section of the same Court. In the same judgment, the Court made clear that religious organizations are not exempted from the obligation to respect freedom of association (article 11 of the European Convention), which also includes ‘the right to form and to join trade unions for the protection of his interests’, provided that autonomy of religious organizations as protected by article 9 of the Convention is also safeguarded.

What the three steps have in common, beyond the many structural and substantial differences, is that they all advance a European understanding of freedom of thought, conscience, religion and belief, as well as of the role of the State as the neutral and impartial guarantor of such freedom. Such understanding needs to be assessed against its background and its purpose. The background coincides with the post WW II European convergence through human rights and the single market. The law of the EU and the European Convention of Human Rights and the relevant jurisdiction through European courts have framed the advent of European institutions and policies, which has also had an impact on the regulation of religion. During recent years, European anxieties about how best to devise relations between States and religion have turned into true alarm about religious freedom in Europe and worldwide. As recognized in the EU Guidelines, ‘violations or abuses of freedom of religion or belief, committed both by state and non-state actors, are widespread and complex and affect people in all parts of the world, including Europe’ (n. 3). Against this background, the elaboration of a common set of principles in the area of freedom of religion and belief is not an end in itself, but aims at empowering European actors with the vision and tools for more effective action within Europe and abroad.

The European concern for freedom of religion and belief, the common core of principles, and the ambition of Europe to be an effective player in the field compose a triangle. This triangle is at the same time the natural result of European integration, and a challenge to national perceptions and prerogatives. Starting from the 1990s, when the impact of Europe on the regulation of religion became blatant, governments and mainstream Churches have reacted to continental convergence through the tentative imposition of a hands-off approach with regard to European institutions. Such national priority was established during the 1990s and consecrated in the Treaty of Lisbon of 2007, resulting in the first two sections of article 17 of the Treaty on the functioning of the European Union. Article 17 stipulates that ‘the Union respects and does not prejudice the status under national law of churches and religious associations or communities in the Member States.’ Section 2 of article 17 extends the principle to ‘philosophical and non-confessional organisations.’

Subsidiarity in article 17 came hand in hand with the advocacy of a wide national margin of appreciation before the European courts and especially the Court of Strasbourg. Tenants of the necessity to resort to the margin of appreciation in order to counter a European expansion, which they equalled to a secularist project, had their moment in 2011, when the European Court of Human Rights crucially upheld the principle in the Lautsi case, deeming compatible with the Convention the display of the crucifix in Italian State schools. In the Romanian Sindicatul case the Court took note again of ‘the wide variety of constitutional models governing relations between States and religious denominations in Europe,’ and stressed ‘the lack of a European consensus on this matter,’ thus concluding that ‘the State enjoys a wider margin of appreciation in this sphere, encompassing the right to decide whether or not to recognise trade unions that operate within religious communities and pursue aims that might hinder the exercise of such communities’ autonomy’ (para 171).

The EU non-competence on religion to which Article 17 gave voice was always an illusory project, systematically disavowed at all levels of the EU legislation and policies, as well as in the European courts of Strasbourg and Luxembourg and in the real dynamic of law and religion in Europe (I have outlined this position already in 2001, in M. Ventura, La laicità dell’Unione europea. Diritti, mercato, religione, Torino, 2001. I will further articulate my analysis in M. Ventura, Dynamic Law and Religion in Europe. Acknowledging Change. Choosing Change, European University Institute Working Paper, Religio West Project, Forthcoming July 2013). Advocacy of subsidiarity to the benefit of States and of a wide national margin of appreciation is based on a pattern squarely opposing Europe to the States, and the religious to the civil. This view is denied everyday in Europe through the actual interaction of levels of governance, shared sovereignty and the intermingling of the civil and religious.

The vision and strategy based on the EU non-competence and a wide national margin of appreciation have resulted in the rise of the confrontation between European and domestic powers as the main feature of recent developments in the interaction of law, politics and religion in Europe. Against this background, the Resolution of the Council of Europe, the ruling on Sindicatul and more powerfully the EU Guidelines, confront Europe with an alternative.

On the one hand, the advancement of a European scrutiny and action can be met with an increasing concern for national and religious identity. The preservation of the domestic priority will then require systematic exceptions to a European standard, for the sake of alienated, and insulated, countries and denominations. This will result in a double standard combining a hands-off EU approach within Europe, and a hands-on approach abroad. A EU foreign policy on religious freedom will thus be transformed into a weapon of mass distraction, neglecting European failures and only focusing of ‘gross violations’ in, say, Pakistan or China.

On the other hand, the advancement of a European understanding, advocacy and activism in the field of religious freedom can trigger a serious quest for consistency, mobilizing the civil society, religious and non-religious actors, member States and European institutions beyond the pattern opposing Europe to individual States. An internal European compliance with a basic standard will thus not convey arrogant European, top down formatting, but the endorsement of a shared project of European citizenship. Coherent internal and external policies on religion and belief will legitimize the EU as a global player. If this second alternative obtains, of course, not only will the structure of the legal regulation of religion in Europe be challenged further, but its substance will as well. Through the EU Guidelines, the European Union has acknowledged itself, for the first time, to be ‘impartial’ and ‘not aligned with any specific religion or belief’ (n. 7): this poses a tremendous challenge to established Churches and States with State religions.

European-level action is also about the impossibility of prioritizing religious freedom to the detriment of other human rights. The point is made explicit in the EU Guidelines in terms of ‘connection with the defence of other human rights and with other EU guidelines on human rights,’ which includes EU Guidelines on LGBT rights. The Sindicatul ruling by the Court of Strasbourg also confirms that religious denominations are not exempted from respect for fundamental rights in their internal organisation, although some limits are envisaged for the sake of denominational autonomy. Many principles listed in the EU Guidelines are far from establishing a consensus amongst many political and religious actors in Europe. This is the case for the protection of LGBT rights, non-discrimination on grounds of sexual orientation, free speech and the prohibition of religious hatred, guarantee of all religions or beliefs, ‘including those that have not been traditionally practised in a particular country, the beliefs of persons belonging to religious minorities, as well as non-theistic and atheistic beliefs’ (n. 10).

A European foreign action regarding the promotion of freedom of religion or belief will not be fully credible, if the dogma of national priority sets European and national institutions one against the other. The rich diversity of the continent needs to be preserved. But internal consistency in the regulation of religion is indispensable, if Europe wants to be a meaningful global player.