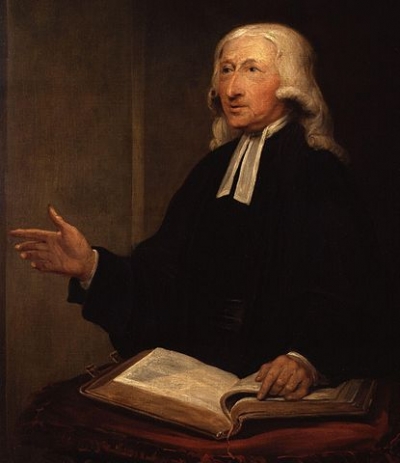 My aim in highlighting this bias is not to pose as a revisionist seeking to gloss over criticism with smug hagiography, but to seek to complete the data with insights gained from a corpus of primary and secondary documents which may still be far from exhaustive and limited in its temporal scope, but which covers an area large enough to redress the balance, i.e. to compensate for the inadequacies and inaccuracies of the critics’ accounts, and to redeem the Wesleys and the other early Methodists from indictments of deliberate manœuvering.

Methodism emerges from our analysis as a movement remarkably efficient in developing a multi-modal discourse which managed to reach the underprivileged working classes and to respond to their needs and aspirations. Charismatic preachers, assisted by laymen who were close to the audience and spoke their dialect (regional as well as social), went out to seek the men and women of England where they could be found, and delivered to them a message of love and hope for a better existence, not just in the hereafter, but in the present as well. The Methodist anthropology, which viewed humanity as inherently sinful and depraved, but also as eminently perfectible and redeemable through divine grace regardless of class or fortune, proclaimed the value and dignity of every individual, man, woman or child, in the sight of God and of their fellow creatures.

This message was conveyed through discourse media adapted to the purpose and the situation – initially, through the outdoor sermons and the hymns; and subsequently also via the well-structured societies, which catered for the associative needs of many uprooted people, which invested them with responsibilities through which they could regain an identity, and substituted a religious nomos for their moral anomie; through publications (tracts, magazines and books) which offered the Methodist men and women a rich and varied language allowing them to explore a new, profounder dimension of existence and gave them a chance to express themselves and “find their voice”; and (later) through the Sunday schools, which provided instruction conducive to upward social mobility as well as gospel-inspired moral standards.

The widespread popular response to the message need not be imputed to cynical manipulation, but may be explained in terms of natural audience motivation. Wesley’s key-word was Love, and a gospel of love was what the underprivileged masses, unlovingly relegated to the margins of society, craved for.

John Wesley and George Whitefield were skillful and effective speakers, and Charles’s hymns provided John’s messages with a highly effective medium, which by virtue of its pleasant (albeit rather difficult) poetic form, rhythm, rhyme and music, allowed memorizing of key concepts. Admittedly, the preachers did resort to clever rhetorical devices in seeking to convince their audiences, and occasionally appealed to scriptural authority or divine inspiration to add weight to their own views; but one need not postulate any insidious manipulative procedures to explain the transforming impact of the words on individual lives:

« When I found myself noticed and cared for by [the Methodist preacher], and even treated with brotherly respect, ... I felt as if I had risen from the rank of nothingness to that of being: I felt as if I really was a man, or destined to be one, and as if the world had not been made in vain. I felt as if I had been an outcast from the world before, [...] and as if I was now admitted within its circle » (The Life of Joseph Barker).

The secondary effects of Methodism – increased self-respect, a sense of belonging to a community, improved family lives and the secular rewards of upward social mobility – seem to have contributed substantially to the success of a message – a factor which even the later critics of Methodism could not but acknowledge:

« The immediate temporal advantages which people of the lower classes feel as soon as they enter [the Methodist] society must [...] be numbered among the most efficient causes of its rapid and continued increase. All idle and pernicious habits, all useless expenses are proscribed. [The convert’s] pride is gratified in the consequence which he obtains by being an acknowledged member of the community » (Methodism Exposed, 1813).

At the outset the Methodist message was intended to be primarily spiritual, though not exclusively so: while Wesley’s religion «of the heart» preached conversion of the individual to scriptural holiness, he insisted that this holiness must manifest itself in the social realm, in a life of stewardship and sharing with the poor. The gospel of universal salvation, then, cannot be divorced from a gospel of social commitment and service.

As a movement, Methodism proved to be successful in terms of adhesion and growth. From Wesley’s own perspective, however, i.e. as the implementation of the ideal of worldly holiness manifested in a social programme of redistribution of wealth to the poor, the revival succumbed to an unexpected side-effect of embourgeoisement. John Wesley spoke out against property and the accumulation of worldly goods (J.W.: The More Excellent Way); but his discourse did contain the seeds of a work ethic which, for rhetorical and semantic reasons as well as for social, audience-related ones, laid the message open to potential misunderstanding and misuse: once its content (“Earn all you can, save all you can, give all you can”, J.W.: On the Use of Money) became truncated and divorced from its spiritual rationale (a community of sharing), it could be read as an incentive to economic enterprise and the pursuit of gain, an interpretation which unwittingly played into the hands of industrial interests.

This reorientation of the religious discourse content was obviously welcomed by the industrialists, who encouraged the spread of a religion which turned its adherents into model workers. But there is little ground, notwithstanding Wesley’s conservative attitude in other matters, to hypothesize a deliberate manipulative socio-political intent on the part of the Wesleyans themselves. Much of the criticism which has been leveled at the revival has been grossly overstated and documented with data wrested from their original contexts.

A comprehensive, discourse-analysis based view of Methodism, which takes into account parameters like discourse genre, purpose and reception as well as chronology, does not vindicate the charge that the revival generally acted as a handmaid in the service of industrial interests by manipulating the working masses into industriousness, diligence, thrift and obedience. Far from being a lackey of capitalism, Wesley spread a gospel of social holiness and advocated a kind of evangelical economics which was fundamentally anti-capitalistic inasmuch as it inveighed against property and the accumulation of wealth.

To be honest, it must be conceded that the later, 19th-century phases of Methodism can not be totally exonerated from the suspicion that the movement eventually came to sympathize with the bourgeois establishment. While some connexions displayed explicitly progressive and even radical sympathies, others came to adopt policies congruent with conservative and industrial interests, and eventually lost touch with the working masses; but the wholesale rejection of the Methodist movement as oppressive rather than liberating can be explained only as the result of a partial (i.e. incomplete and biased) representation, which fails to highlight the substantial positive contribution of Methodism to English society as a whole.

At a time when England and its Church seemed to be morally crippled, the Wesleys and Whitefield managed to restore religion to life and activity, to give it a central place in people’s existence, and thus to transform the lives of individuals and communities; not only by seeking to redeem them from fear, guilt and loneliness; not only by encouraging charity and social solidarity, not only by promoting education and developing community life; but also, and more importantly, by standing up for the underprivileged and giving meaning to their lives – a sense of the responsibility, value and dignity of every human being, to be realized in the practical circumstances of everyday life, and accessible to all. In this sense, by projecting the image of a perfectible humanity, and infusing in the hearts of people a new spirit of love and hope, Methodism tried, despite the difficulties and imperfections inherent in all human endeavor, to live up to the gospel calling to be the salt of the earth.

Plus dans cette catégorie : « Critical Theolinguistics vs. the Literalist Paradigm One nation under God? Religion and politics in 2012 America »
Retour en haut