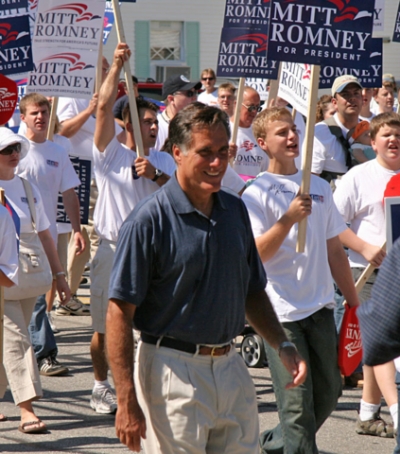 This electoral year has done nothing to minimize the importance of religion in America's public arena. Republican candidates have been jostling to prove their religious credentials with statements on the Christian identity of the United States or the lack of religious basis to President Obama's policies and the last few weeks have seen the Republican party become bogged down in a debate over birth control. In the face of the very strong religious rhetoric it is easy to forget that the United States were created on the principle of separation of Church and State. This oversight is all the more understandable on this side of the Atlantic as 55% of Americans themselves believed in a 2007 poll that the Constitution established a Christian nation (The First Amendment Center, “American's Attitudes Towards The First Amendment”, 2007). This is far from the truth.

The first amendment to the Constitution states very clearly the separation between religion and politics in its very first sentence “Congress shall make no law respecting an establishment of religion, or prohibiting the free exercise thereof”. It is understandable that a nation whose first settlers had fled religious persecution and that had been beset during its short history by several instances of religious intolerance would be founded on the principle of non-interference of government in spiritual affairs. The constitutionalization of government neutrality in matters of religion has been upheld by the Supreme Court. To the point where, every holiday season, the courts are called upon by secular and atheist groups to ban Nativity Scenes on public property (the Christmas Tree, Santa and Reindeers are allowed because they are not considered “religious” symbols).

However, whereas in Europe there is more or less a consensus on the issue of secularism (although there are strong national differences between States and even the most secular ones such as France are now having to renegotiate its terms in the face of demands from religious groups) this is not the case in the United States. The issues of prayer in public schools or of teaching creationism are regularly in the news with militant parents attempting to have these practices allowed. In the last decade, George Bush had no qualms in letting his religious beliefs guide his policies be it in cutting funding to aid organizations that did not prone abstinence overseas or in his strong opposition to gay marriage at home. And yet, although battered, the “wall of separation” to use the words of Thomas Jefferson still stands.

2012 is an interesting electoral cycle because of the case of Mitt Romney. At the time of writing this article, Romney is still the presumed GOP nominee and will in all likelihood face Barack Obama in the fall. But Mr Romney is a Mormon. The question of whether white Evangelical voters, who are a key element of the Republican base, could back a Mormon has loomed large over the Republican primary. A poll conducted by Pew in November 2011 found that 15% of those voters declared that Mr Romney's religion would make them less likely to support him as a candidate. In the Michigan primary on February 28th, exit polls show that they backed Mr Santorum (a very conservative catholic) against Mr Romney 51% to 35% (The New York Times, “The Caucus Blog”, February 29th 2012). However, 91% of white evangelical Republicans would back Mr Romney in a matchup against Mr Obama (Pew Research Center, November 23, 2011). In this case politics trumps religion. One could argue however, that part of white evangelical republicans' opposition to Mr Obama is faith-based since they are the group that most believes that the current President is a Muslim.

In a broader sense, religion affects voting behavior and party identification in three ways: religiosity (the more religious one is, the more likely one is to be a Republican), traditionalism (the more traditional one's religious beliefs are, the more likely one is to be a Republican) and denomination (Evangelicals are the most likely to be Republicans, Jews are the most likely to be Democrats and Catholics and mainstream Protestants hold the middle ground) (see Pew research Center, “Religion and Politics 2012”). However, this only concerns white voters. Religion does not affect the electoral behavior of African-Americans and there is only slight indications that Evangelical hispanics favor the Republican party more than other Hispanics. White Evangelicals have emerged as the most socially conservative and most consistently Republican religious group. Their influence is particularly potent during the primary elections when Republican candidates need to mobilize these crucial voters whose grassroots mobilization makes them the key to clinching the Republican nomination. Mitt Romney's inability to connect to the White Evangelicals (in part because of his religion, in part because of his previous pro-choice stance) is one of the reasons why he is having such difficulty becoming the nominee despite his almost limitless funds and the backing of the Republican establishment.

These questions, although important, should not hide the bigger picture. Since 2006, a majority (albeit a slight one at 52%) of Americans consider that religion should not mingle with politics. This may seem tenuous but the trend is what is important. Before 2006, the majority of Americans thought that Churches should express their views on social and political issues (Pew Research Center “Religion, Politics and the President”, August 18, 2010). These numbers, when taken together with the polls on religious beliefs that show that those who claim to have “no religion” is the fastest growing group in the American religious landscape (at 15% of respondents, up from 8% in 1990, those who reject all organized religions are now only outnumbered by the Catholics and Baptists — see American Religious Identification Survey, Trinity College, 2008), show a much more nuanced picture. The fact that the American population has become consistently less religious, along with a growing tolerance on social issues means that although Evangelicals are growing in numbers and their high level of political mobilization makes them a force to contend with, they are gradually growing more distant from the values of mainstream America.

This is the dilemma faced by the Republican party today, the very radical discourse it needs to use in order to satisfy the White Evangelicals is distasteful to an ever more important number of Americans. Bridging the gap between the primary constituency and the general election has become increasingly difficult for Republican candidates as the White Evangelicals have become more ambitious and the rest of the population has moved to the center. Thus, it could be said that by over-reaching into the political sphere and making Republican candidates pass their litmus tests, the Evangelical movement has become a liability to the very party it seeks to promote.