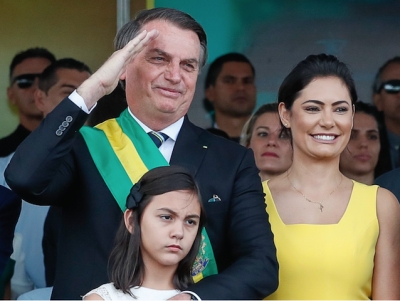 The support of religious groups was central for Bolsonaro to obtain the votes of sectors of Brazilian working class and defeat the Worker’s Party (PT) candidate Fernando Haddad. In this article, I want to address the importance of religion in contemporary Brazilian politics and its possible role in the recent authoritarian turn in national politics.

Religion has always played an important role in Brazilian politics. Since the Portuguese colonization until the end of monarchy in 1889, State and the Catholic Church were merged through the patronage system between the Holy See and the Portuguese (and after 1822, Brazilian) Crown. The formal separation between State and the Church was established by the 1891 Republican Constitution. However, it did not avoid the maintenance of catholic moral values as a defining feature of many constitutional articles, such as the prohibition of the divorce in civil marriages, only abolished in 1977.

It also did not prevent the catholic clergy to engage in politics on local, state and national levels. Priests, bishops and other catholic authorities participated direct or indirectly in some crucial political events, either supporting conservative and right-wing groups, as in the 1964 military coup d’état, or defending human rights and other social movements fighting for democratisation in the 1980s. In this sense, religion has been a crucial feature of Brazilian politics.

The religion field has experienced dramatic changes in the last decades in Brazil. The growing participation of evangelicals (evangélicos) in institutional politics is possibly one of the most important of these changes. In Brazil, evangelicals encompass both historical protestant and (neo) Pentecostal denominations. Still, when it comes to the engagement in elections and party politics, the prominence of Pentecostals is undeniable. They have been very active in politics since the elaboration of the 1988 Constitution.

Evangelical’s congressmen defended conservative Christian values and barred pro-reproductive and sexual rights’ initiatives to the new Constitution. Together with Catholic congressmen, evangelical’s parliamentarians secured the role of religion in society, by keeping civil effects of religious marriages and religious education. Since then, evangelical’s congressmen have been successful in guaranteeing Radio and TV’s public concessions and financial resources to their churches. These led to a boosting in the so-called evangelical caucus (bancada evangélica) in the National congress.

Since mid-1990s, AD and UCKG have drawn a political strategy based on supporting (logistical and financially) candidates for legislative posts. Both Churches have political committees, which select candidates aligned with their ideological and political guidelines. Once elected, these candidates act as a lobby to their denominations’ interests. These interests are very heterogenous and evangelical congressmen have been skilful in adapting their demands to presidential agendas. Members of the evangelical caucus were present in all presidential coalitions since 1990s, in both centre-right (such as Collor’s and Cardoso’s) and centre-left administrations (such as Lula’s and Rousseff’s).

This closeness to the presidential power (the core of Brazilian political system) allowed evangelical parliamentarians to guarantee tax exemptions and public funds for social works of their Churches. This political position helped AD and UCKG to increase their number of followers national and internationally. The ownership of Radio and TV stations also helped both Churches to reach great audiences, turning Protestantism into the second biggest religious segment in Brazil, with 22 % of population identifying themselves as evangelicals. AD and UCKG have also expanded internationally, particularly in Latin America, Sub Saharan Africa and among Brazilian diaspora in Europe and the US. In the case of UCKG, its founder and main leadership created a media and financial conglomerate, with strong ramifications in different sectors of Brazilian economy.

Ideologically speaking, members of the evangelical caucus are unanimous in their defence of the “Christian family moral values”. This represents a strong opposition to women and LGBTQI rights and to other morally sensitive issues, such as the legalisation of the use of recreational drugs. They successfully blocked some pro-sexual rights bills in Congress, like proposals to recognise same-sex civil partnerships, to decriminalise abortion and to ban homo- and transphobia. They had a support of parliamentarians linked to the Catholic Church, particularly regarding abortion and the legal recognition of same-sex couples. The moral agenda has been extensively used as a political rhetoric in elections by evangelical candidates, ensuring them good electoral results.

Bolsonaro, a then former-captain congressman, was nationally known for his aggressive remarks on media defending torture during the military dictatorship, the ban of human rights and other authoritarian proposals. Since 2011, Bolsonaro has largely used the moral agenda, particularly the opposition to women and LGBTQI’s rights, to secure the support of the evangelical caucus. Inspired by the successful example of Donald Trump in forging a broad conservative coalition in the US 2016 elections, Bolsonaro converted the Christian conservative moral agenda into one of the cornerstones of his electoral platform in 2018.

Evangelical leaderships saw in Bolsonaro an opportunity to have a more active position in national power. It is important to underline that many of these leaderships have widely relied on the rhetoric of “spiritual wars” in their missionary work. Feminists, LGBTQI, followers of Afro-Brazilian religions are portraited as “sorcerers”, “enemies of the family”, “threats to society and to the good citizens”. These spiritual wars have been based in an antagonistic logic of “us” (“the people of God”) against “them”, in which the meaning of “them” was recently broadened to include “leftists”, “free thinkers”, “cultural Marxists” and “gender ideologists”.

In a context of growing exposition of corruption scandals involving high-profile politicians, some of them with ties to the PT, evangelical leaderships point out the visibility of feminist and LGBTQI issues, caused partially by some policies implemented during Lula’s administration, as a proof of the “moral corruption” in which the PT has immersed Brazil. This discourse allowed an articulation between the moral agenda forged by the evangelical caucus and the widespread anti-PT sentiment (antipetismo) in society. This discourse enabled Bolsonaro to portrait himself not only as the candidate committed to the Christian moral values, but also the only one capable of “saving” Brazil from the PT.

Once elected, Bolsonaro granted a greater say to evangelical leaderships in his administration, leaving to them the nomination of two important ministries: education and family, women and human rights. Even the Brazilian Foreign policy has experienced a “U-turn”, partly because of the stronger influence of the evangelical caucus. Examples of this change are the approximation to Israel and the support of anti-gender initiatives in international forums. Despite the unpopular measures and the growing rejection of Bolsonaro among the electorate in general, the evangelicals are still one of the core supporters of his government. The privileged position of the members of evangelical caucus in the Bolsonaro’s government, clearly demonstrate the organic character of this alliance.

His election seems to crystallise a conservative political front composed by agrobusiness, evangelical, pro-guns and pro-finance lobbies around a Christian-extreme-right authoritarian agenda that aims to hegemonize Brazilian politics. The international situation, characterised by the rise of authoritarian governments, including in well-established democracies such as the US, and the internal context, marked by the fragmentation of the centre-left spectrum and the empowerment of right-wing extremists in the political system, impose no check to the action of this conservative front. The ambiguous position of the Catholic Church regarding the Bolsonaro’s administration does not contribute to change this trend. In this sense, the growing influence of the evangelical caucus in politics under Bolsonaro represents a danger not only to the maintenance of the secular State, but also to the continuity of representative democracy in Brazil.