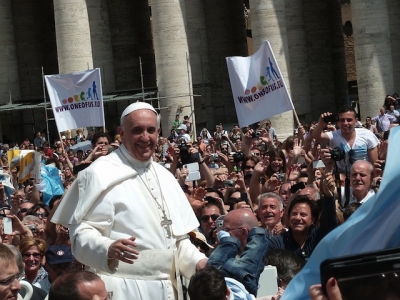 From the very outset, Francis seems to have aimed first and foremost at establishing a (re-)opening up of the Church ‘towards the people’. His recent appointment of 20 cardinals, some of whom were rather unexpected in light of their ideological profile and geographical background, bears testimony to this globalizing, decentralizing evolution, while his insistence on the papal title of bishop of Rome shows his willingness to move towards a less authoritarian and power-based Church. A certain degree of transparency thus seems to have been introduced into Church affairs, whereas Francis has also manifested his intention to bestow increasing responsibilities upon catholic laity. However, the newly elected pope’s most noteworthy intervention was directed at revisiting the role of Church institutions, with Francis expressing his intent, as early as April 2013, to pursue an overhaul of the extremely powerful Roman curia.

Over the years, the latter organ has become a symbol of clerical corruption and what some have described as decadence, notably plagued by scandals such as the recent Vatileaks. Accusing it of suffering from narcissism and even from what he termed a form of ‘spiritual Alzheimer’s’, in April 2013 Francis has appointed an ad hoc-commission of 8 cardinals (9 since July 2014) to assist him in the planned restructuring operation. By tackling the Vatican’s internal, hierarchical organisation, he thus seems to aim at making a clear break with the past, moving the Church back towards its ‘core business’, i.e. its evangelical vocation. His apostolic exhortation Evangelii gaudium clearly emphasizes this. Finally, this staunch attitude vis-à-vis the Catholic Church’s internal affairs is in stark contrast with his position on other religions, which is characterized by a markedly conciliatory note. While his predecessor has been harshly criticized for his controversial discourse on Islam –cf. the 2006 Regensburg lecture-, Francis seems particularly keen on interreligious dialogue, even if his efforts have so far been nearly exclusively directed at Christian confessions.

While not possessing any effective political power outside the Vatican walls, the resonance of the pope’s every statement in modern mass media invests him with a kind of ‘soft power’, of which the effectiveness is as certain as it is unquantifiable. Francis seems fully aware of this, displaying a rather down to earth, frank approach towards everyday political and societal affairs, issuing increasingly political statements. The most illustrative example of this tendency is the recent implicit referral to the need for (if necessary military) intervention in Iraq (August 2014), a move that, after long years of absence, heralds the comeback of the thesis of the ‘just war’. Largely considered, before his accession, as the Argentinian president’s most influential political foe, Francis is indeed not shy of (selectively) intervening in the political domain, notably catalysing a strengthening of ties between the USA and Cuba in the autumn of 2014, and delivering reprobating speeches to both the European Parliament and the Council of Europe in Strasbourg in November 2014. On this latter occasion, the papal rhetoric was as virulent as it was out of line, producing near-worldly echoes of his criticism of the Roman curia, with Francis referring to an ‘ageing’ continent that should ‘wake up’ from its present state of passivity.

Whereas his political discourse is often inspired and dominated by humanitarian themes –he urges Europe to tackle the immigration issue by cultural and social means rather than by repression-, it can also be guided by what the German-speaking world would refer to as Realpolitik. This latter preoccupation is clearly evidenced by his attitude towards Asia, a continent to which he seems to be directing most of his energy. Having undertaken trips to South Korea, Sri Lanka and the Philippines, China in particular seems to be a major political stake to Francis, who as a direct consequence seems to have deliberately avoided meeting the dalaï lama in December 2014, in spite of the latter’s Nobel Peace Prize, and of Francis’s mentioned inclination towards interreligious dialogue. In light of all this, it should come as no surprise that the rather vehement tone that characterized his criticism of the European continent is nowhere to be found in the Asian speeches, where a highly conciliatory, seductive pope appeared. Finally, and as counts for predecessors such as Pius XII and Benedict XVI, politics also constitutes Bergoglio’s Achilles heel, as evidenced by the controversy surrounding his role during the Argentinian so-called ‘Dirty War’.

Whereas Francis’s ‘political’ range of action thus extends to both the Church’s internal affairs and, albeit selectively, to global politics, his most sincere concern seems to be the issue of social inequality. Indeed, apart from his explicit condemnation of the perversive effects of the mafia in Italian society –he famously stated that mafiosi are to be excommunicated-, he does not only make the kind of general statements popes usually proffer on issues such as poverty and migration, but has repeatedly uttered criticism of the dehumanizing effects of finance capitalism, i.e. the predominance of the financial market logic in contemporary society. This constant preoccupation has even led some to polemically label him a Marxist. While he has firmly rejected this accusation, he has maintained that social, and not economic matters should dictate politics, in Europe and elsewhere. A similar concern also seems to underlie his stance on environmental matters, a topic that his second encyclical will address.

By tackling these matters, he has tied up with two of the most relevant, if not crucial, issues in present-day society. That being said, on many other levels, not least when regarding fundamental debates such as that on abortion, contraception, euthanasia and homosexuality, Francis represents, if not outright doctrinal conservatism, in any case a preference for what could be termed papal ‘business as usual’. Indeed, while he has for example stated that on a personal, human level, he does not have the intention, nor the right, to judge individual homosexuals, his criticism of homosexuality in itself, notably uttered during his time as archbishop of Buenos Aires, as well as his opposition to same-sex marriage, is as outspoken as it remains unaltered.

Which brings us to a final, but crucial observation concerning Francis’s pontificate, which is about to enter its third annus. When acceding to the papal throne, he inherited a Vatican and a Church whose image had been tarnished by numerous and clamorous scandals. While for example criticizing issues such as massive sexual abuse by clerics, no significant actions have been undertaken in order to avoid such excesses. Indeed, the so-called ‘Francis effect’ does not so much seem to reside in his doctrinal or practical impact, as it does in his developing a new style and image. Francis is highly conscious of this potential, restructuring the Vatican’s media and communication services and regularly using social networks such as Twitter and Facebook, while also displaying a more casual, modern style.

This has led media around the globe to define papa Bergoglio, who has repeatedly been elected Man of the Year by periodicals and newspapers around the globe, as a modern, hip, sexy pope. Symbolic actions such as refusing to live in the Vatican papal apartments, driving around in an open-hood, low-cost papamobile, having himself photographed in the company of and by admiring youngsters: all this has contributed to the creation and worldwide diffusion of a popstar-like image, that of the cuddly, smiling pope. However, this status as something of an icon also hides a less colourful picture, as Francis’s concrete impact seems to be mainly limited to an inwardly directed operation. Indeed no significant doctrinal changes have been announced over the last two years. While it is thus illusory to expect more than a status quo on issues such as sexuality, life and death, i.e. matters which for many count as the major barometers of human progress, it can only be hoped that his discourse on socio-economic and environmental issues will be translated into more concrete actions than has thus far been the case. These are issues that might make Francis a pope of substance, and not only style.